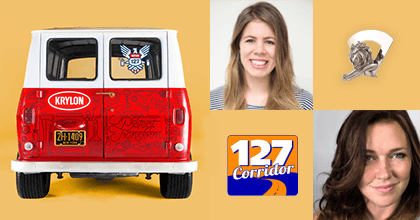 The World’s Longest Yard Sale,—also known as the 127 Corridor Sale—takes place every August along 690 miles of US Highway 127, from Michigan to Alabama. The legendary event was the setting for a multifaceted promotion that took place across multiple social media channels.

In the rulebook for the Cannes Lions International Festival of Creativity, a potential Titanium Lion winner is defined as:

“The definition of Titanium for the purpose of Cannes Lions is creative ideas that point to a new direction for the industry and redefine the creative landscape. Titanium Lions will be awarded to ‘game-changing,’ breakthrough ideas that open new doors, change the world of creativity and inform new ways of thinking.”

Erika Kohnen and Lauren Cooper’s project “The First Ever Pinterest Yard Sale” certainly fits that lofty standard. We recently caught up with Lauren, the writing half of the team, and got her take on the project and her and Erika’s Miami Ad School experience.

Carlos Vazquez: How did you and Erika team up? Were you still in school or was it at Deutsch?

Lauren Cooper: Deutsch teamed us up. Erika went to Miami Ad School in San Francisco and I went to Miami, but we first met at the Miami Ad School agency lab at Havas in New York. Later, we were both hired separately, right around the same time, at Deutsch. Putting us together probably seemed like a no brainer. So, totally unplanned, but it definitely worked out.

CV: Looking at “The First Ever Pinterest Yard Sale,” I’m struck by how cohesive it is. No aspect of it seems like an afterthought. It all flows naturally from both a conceptual and executional perspective. What was the first seed of the idea and how did you find it?

LC: The first seed of the idea actually came from our team before we were ever on the scene at Deutsch. Menno Kluin, Sam Shepherd (Both Menno and Sam are also Miami Ad School grads. Ed.) and Frank Cartagena got the ball rolling when they produced a series of TV spots based on the insight that a great spray paint can add value to old or worthless items.

When we got to it, we thought it just needed an experiential activation, which is how we found the existing 127 Corridor Sale—the world’s longest yard sale. In concepting with the amazing digital team at Deutsch, we found out that Pinterest would soon be rolling out Buyable Pins—meaning we could be the first to use them—and “The First Ever Pinterest Yard Sale” was born.

That’s probably why the idea seems so cohesive. Every department was highly involved and it was a scrappy team effort from start to finish.

Items were sold on Pinterest in real time. This was the first effort by any brand to turn Pinterest into a marketplace and helped to launch the platform’s new “Buyable Pin” functionality. All of the proceeds from the sale went to Charity Wings Arts Crafts Center, a nonprofit organization that hosts free art classes and events for DIY communities around the world.

CV: As a student, you never really know how collaborative the process of ideation and execution can get when you’re part of a big agency team. It can be really eye-opening when your first big project takes on a life of its own. What was that experience like, what kind of things came up and how did you deal with them?

LC: It was super collaborative. The actual event took place over four days—over a weekend—with half of us on the road picking out items to transform and half of us back home in New York updating everything in real time on the website and all of Krylon’s social channels.

It was our very first project at Deutsch and we got to see immediately how important a strong team can be. Whenever anything’s happening in real time, unexpected things come up. But every single person on the team, from back-end web developers, to designers, to the social content creators, were all on call to make everything look seamless. It really taught us a valuable lesson early on about the importance of having talented and driven people to work with.

CV: What are the favorite parts of your Miami Ad School experiences? What do think are your most important takeaways from your time here?

LC: Although we both attended different base schools, our favorite parts of our Miami Ad School experience are basically the same:

Friends: Even today, over a year after graduation, we’re both still close with a lot of our friends from Miami Ad School. There’s something great about knowing that almost any agency you walk into probably has at least one person you know inside. Our friends are our sounding boards for the industry and a constant source of inspiration and friendly competition.

Internships: I always say the best thing about internships is they’re your chance to mess up. Accept that and get all the mistakes out of your system. Ask for (and be open to) honest feedback, and show up at your first real job ready to work. Anyone who thinks they had a flawless internship experience probably didn’t ask for feedback. Really, if you’d been perfect, they’d have told you in the form of a job offer.

Travel: Between the two of us, we have internship experience in Berlin, Singapore, and Tokyo. Learning how the rest of the world works was a huge benefit for us and we bring those new perspectives to every brainstorming session.

TV host, furniture designer, carpenter and design blogger Amy Devers embarked on a mission to seek out the most quirky and unique objects she could find. She and her trusty Krylon van traveled the route, and the finds and their restoration were featured in how-to segments on YouTube.

This campaign born on social media. This was a Twitter, YouTube and Pinterest show, all the way. In keeping with the theme of taking junk items worth pennies and turning them into desirable objects, the effort gained $2.7 million in earned media on a $200,000 investment.

Social can tell brand stories other media can’t, with levels of effectiveness that outshine the mainstream communications channels marketing has relied on for decades. This is social media practiced at the highest level.

@miamiadschoolmumbai
Ideas are like gold, mine them, refine them and ma

What's in an AD? Is it the client brief, brand la

Meet Miti Desai the creative head and founder of M