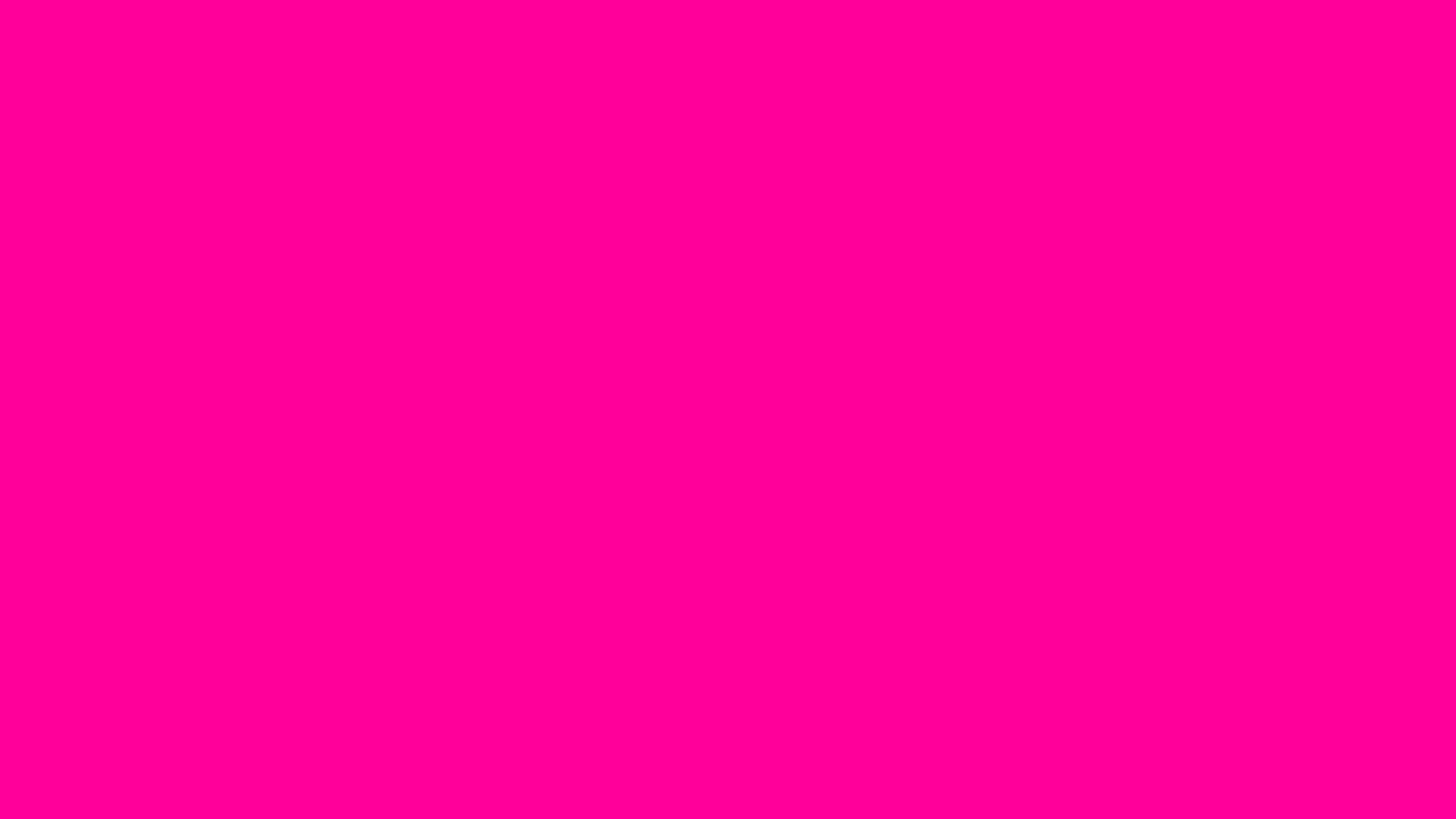 Pink Seesaws: The Power of Design

Bruce Mau is famous for saying, “Massive change is not about the world of design; it’s about the design of the world.”

It’s true. As designers, it’s easy to be caught in a bubble—to focus on the comings and goings of other designers, and on trends popular in the inner circle.

What you create can change everything. Good design creates a better life every day, and for many people (probably 90% of the world) it’s often nothing but a mere moment—promised only by hope.

All of which brings us to the latest, most inspiring example of how design spurs change: the pink seesaws on the border.

The Mexican/U.S. border is the most routinely crossed land border in the world. There are about 350 Million crossings every year.

It was called the Teeter-Totter Wall, created by the husband and wife duo of Virginia San Fratello and Ronald Rael. Last week, their project was awarded as the winner at the Beazley Designs of the Year awards, hosted by the Design Museum in London. It’s no small feat: the awards have been called the Oscars for design.

The selection could not have been more appropriate. In the midst of a presidency more polarizing than any in recent memory, the installation allowed residents of El Paso, Texas and Juarez, Mexico (for a short time) to come together and play. It was a symbolic moment.

The amazing thing is: the seesaws lasted only forty minutes before being taken down. But their invention proves how lasting and far-reaching one simple idea can become. Case in point: the project’s impressive viral hold on Instagram: https://www.instagram.com/rrael/.

10 Years in the Making

Ronald Rael’s first sketch was created while he was living in Amsterdam, 10 years before the reality of the Teeter-Totters.

Those were years-long before Donald Trump ever made noise about a wall…but after George Bush’s Secure Fence Act of 2006, the seeds of division were already being sown (and to a certain degree, taking physical form).

As he imagined in that first sketch, “I remember that part of the idea was that each person would be lifted just above the height of the wall to peer over it. Something so ordinary becomes so extraordinary, a project in development for almost 10 years, the Teeter-Totters demonstrates how children playing together can create unity in the larger community.” 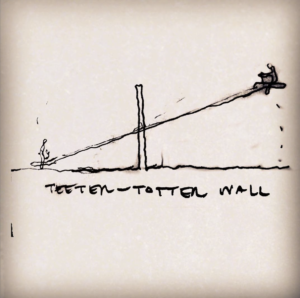 The renowned designer, Paul Rand imagined, ”design is so simple, that is why it is so complicated.”

Such is the instance here (with the complexities of politics) and yet, the simplicity of play connects children in heartfelt ways. We might recognize the fantastic metaphor in a simple seesaw: two children on either end, each can see the other as they go down…only to be lifted all over again.

To use the words of Rael, it’s, “a reminder that the actions on one side have consequences on the other,” 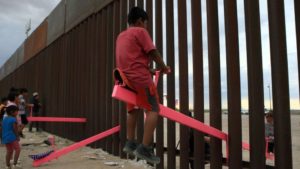 The 10 years of consideration and development would seem to show just how deep the threads go for this project. Though on the surface the result is simple, the connections (and contexts) are profound.

Rael even published a book in connection with the event, “Borderwall as Architecture: A Manifesto for the US-Mexico Boundary”. In it, he attempts not only to raise awareness of the impacts felt by the wall’s construction, but to reorganize the reader’s thoughts about the people and places along the border. Rael argues that the wall itself, rather than fulfilling its dismal purpose as a divisive instrument, instead acts like an attractor—pulling in both sides of the border for connection and communication.

Fearless in the Face of Controversy

The border wall, like so much of political maneuvering in recent years, has been a divisive and unpleasant issue. Fundamentally, it’s an object that speaks to the worst in us: desires to exclude, to divide, and to label an “other”.

In the face of that, Rael and San Fratello’s project seems an almost impossibly optimistic exercise. And one that came about with not a little bit of rebelious spirit. As San Fratello noted in a conversation with Dezeen, the project was never given “official” permission. As US officials put it in a statement, “There is no playground along the U.S.-Mexico border wall in New Mexico.”

The whole project designed and assembled secretly, and installed quickly to avoid rousing the attention of the ever-present border patrol. 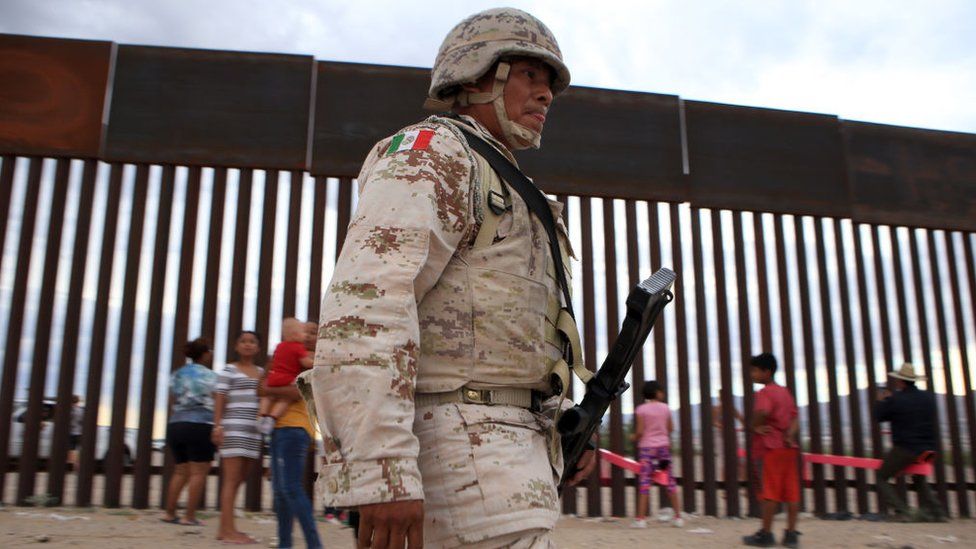 Nevertheless, despite the covert beginnings, the project has resonated powerfully around the world. As San Fratello put it, “The project resonated with people around the world in a way that we didn’t anticipate,” San Fratello said when the award was announced. “It speaks to the fact that most people are excited about being together, and about optimism and about possibility and the future. And the divisiveness actually comes from the minority.”

And there, in those few sentences, is the heart of the issue.  By confronting one of the most controversial and polarizing topics of our day, San Fratello and Rael made more impact than perhaps they even could have imagined.

It’s an important reminder. As we move forward into the cautiously optimistic uplands of 2021, it’s worth remembering how our creativity can spur positive change. The installation may have been temporary—but the feelings and considerations it engenders should last quite a bit longer. And with any luck, as Rael put it, we’ll, “start building more bridges instead of walls.”

How simple to realize if we want to change the world, it comes from wonder. And sometimes we start first just by sharing in our own backyards. Every bond we make leads us to know a great lesson: that being committed can lead, as Mahatma Gandhi, imagined, ”to being the change you wish to see in the world.”

The magic comes from believing.