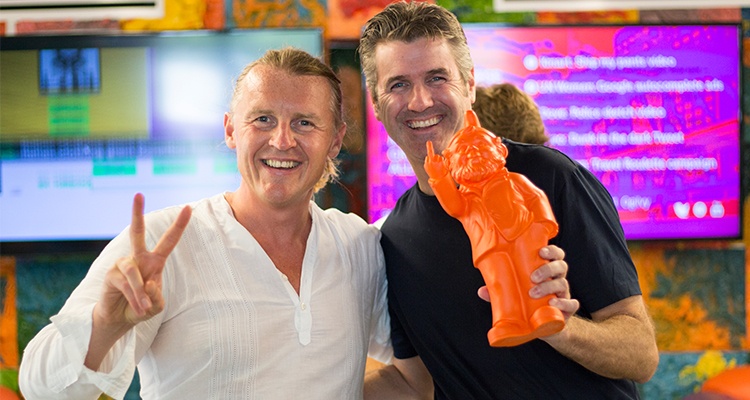 Miami Ad School is the Harvard of Brand Creativity

“They have a curriculum, culture and educational approach that gets the best out of people.”

“This was the first time in my life I see a school look at people the same way I do.
Miami Ad School doesn’t just look at who people are but at who they can be.”

We invited Erik Saelens, the charismatic and forward-thinking Founder of Brandhome, to Miami Ad School as part of our Industry Hero series. Each week a top industry expert, from someplace in the world, comes to lecture and hold workshops at the school allowing our students to learn all aspects of the business directly from the people who are shaping it.

Erik’s visit was unique because he brought a large portion of his Antwerp, Belgium based creative team with him to work with the students. Brandhome was the definition of hands-on learning. From the moment they arrived in the school’s main gallery, Brandhome set up shop and went to work exactly as they would have at their home offices in Antwerp. Erik was directing the entire operation and the Brandhome staff members were working with the student teams within their professional skill sets. The result was essentially an agency at work in the school for a week straight. This lead to some great work, a better understanding of how to work in a real-world environment and a deeper understanding of the work processes of Brandhome. They really reset the bar for participation in the Industry Heroes program – in terms of involvement, volume and quality of work and fun. 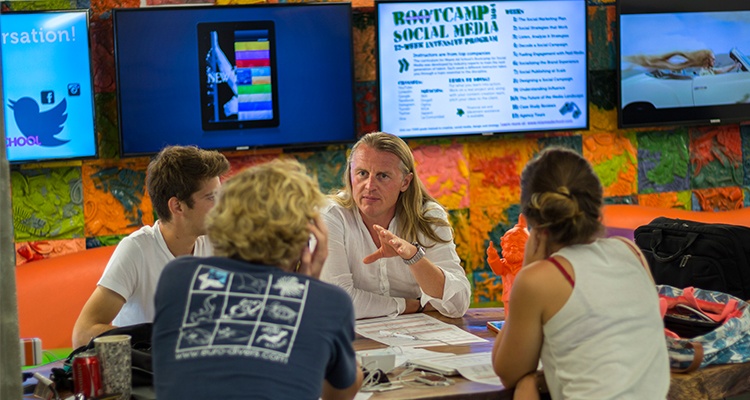 Meet the Brandhome Team that Inspired and Coached the Students.

Jef Pelkmans spoke about Social Storytelling and Alec Van Noten & Elise Demuynck shared their 2015 Cannes presentation on new trends in the advertising industry. The Brandhome team also prepared 11 full-fledged briefs for the students to work on and coached the students as they concepted and developed their campaigns. Students were excited to participate in this special event, especially because Brandhome teaches a workshop at Cannes every year.

Each student team completed three branding campaigns  in one week!

Each individual student was assigned a brief that they completed with their partner and also had to solve one larger branding challenge that was given to all the student teams. Each team executed three complete branding challenges in one week! Brandhome generously made their entire staff available all week long during business hours to work directly with the students on their solutions.

Excerpts from a few of the briefs the Innovation Lab students worked to solve.

• Improve the brand image of FIFA through an honest and football-praising message. See the campaign as an ode to football. The campaign needs to have global reach and your conceptual idea needs to be elaborated throughout the different communication channels you think are best. You know what? We did a recent survey about the FIFA scandal! It might be helpful.

• Prima Donna, a Belgian based brand devoted to women’s curves offering bras with cup sizes up to “J”, has the perception of being a corny brand for older women. They want to overcome that old-fashioned prejudice. Since the brand’s quality surpasses every other brand, we know women will become loyal after having experienced the product. Introduce the product to a younger target 15-35y. In the campaign indirectly deposition other brands that do not ‘take care’ of your breasts without starting a head to head fight with these other brands. Develop a concept that engages this younger audience in a fresh and feminine way.

• In Europe there has been a lot of negative press around the police in the USA. They are perceived as being violent against African-Americans, and thus the country is seen as being that way too. The African-American community is seen to have a negative attitude toward policeman as a result of the incidents. Just like in any situation, simplifying the world in this way is not a good basis to start from. Therefore, the US government would like to change this. It is your job to develop a campaign that succeeds in breaking these stereotypes. The ultimate goal is break the current vicious circle and make both groups respect each other and interact in a more positive way. Use any communication channel you want but since you are talking to very large, widespread audience, basically everyone everywhere, make sure your idea is scalable.

Above: Erik, Mark Smith, Director of Brand Synergy at Miami Ad School and the Brandhome mascot, the orange f@#% you gnome.

This was such a success Brandhome and Miami Ad School are already planning for next year when all the briefs will be live briefs from clients!

Exciting things are coming in 2016! If your brand wants to get involved in this exciting new offering, reach out to us to learn more about ourInnovation Labs.

“This is a great opportunity for companies that can benefit directly from the recent Trans-Pacific Partnership free trade deal. We live in an era of rapidly increasing globalization both in business and culture – advertising lives at the intersection of these. This is just the type of challenge Miami Ad School’s Innovation Lab solves best!”  – Mark Smith, Director of Brand Synergy, Miami Ad School

Want to know more about Brandhome?

“The most important law in marketing: if you want to become the market leader you have to create your own category…Big brands, small brands, governments that are in trouble…come to us. We are the guys companies go to to make the impossible possible.” – Erik Saelens