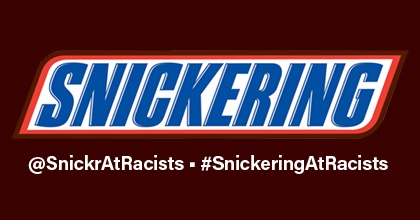 Snickering At Racists, A Finalist in Miami Ad School’s Unity Initiative, Takes the Fight to the Racists on Twitter, One Snarky Tweet At a Time. 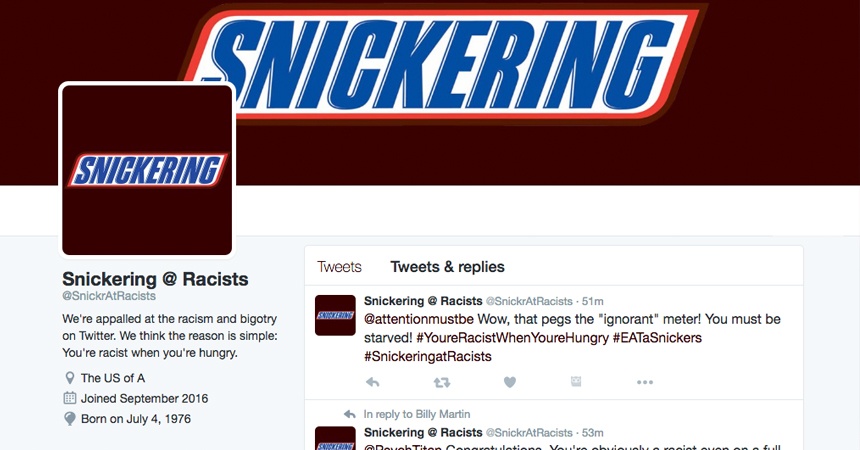 With the current state of race relations in our country, we need to take action where and when we can. Though we’d all love some sort of grand gesture—a massive and decisive event that sets things right once and for all—real change doesn’t happen that way. A lasting change is made up of little victories that slowly change minds.

Miami Ad School students in Atlanta, Miami, New York and San Francisco developed projects to promote understanding and racial unity. Student teams came up with 100 unity initiatives. Judges—leaders in industry, government and advertising, selected the top seven. Now it is time for you to be the judge. Vote for the best idea. To help you decide, we’re featuring each finalist in a blog post of their own.

Miami Ad School San Francisco art directors Hanna Petersson and Kensey Lacey and copywriter Shireen Beygui decided to go after racist bigots where many of them live—in the darkest, dankest corners of Twitter, stare them down and poke fun right in their faces. Hey, they can’t be that bad, they’re just racist when they’re hungry.

How did you feel about the challenge of the Unity Initiative?
We were very excited about doing work in support of such an important cause. However, it was a bit intimidating, as we wanted to be sure that we did it justice and handled the very serious issue of racism in a thoughtful way.

How did the idea for Snickering At Racists come about?

We felt that while words and actions can both be violent, it occurs in very different ways. In many ways, hateful speech can be more pervasive and damaging than actions, because of the lingering effects. We wanted to take the power away from bigots, and put it in the hands of their targets instead. We were going about this in a very cautious way, until our instructor reminded us that humor can actually be a very powerful tool, if done appropriately. We were inspired by the Snickers current campaign: “You’re not you when you’re hungry.” The idea was that no one can possibly be as hateful as their post on Twitter would have us believe, so they must simply be hungry. When you take away the intention behind the speech, it becomes less powerful and damaging.

What would you like Snickering at Racists to accomplish?

We understand that we can’t change the mind of every bigot out there, unfortunately. Instead, we wanted to focus on empowering the subject of this speech by taking away the power behind hateful language. In a sense, we are belittling the words of those who choose to be racist by not allowing them to have their desired effect. We would hope this could somehow mutate into shame on the part of the poster so that they don’t spew more hateful language in the future.

Your project requires seeking out racist tweets. How has that experience changed your perspective? How difficult is it maintain the right “voice” for the campaign in the face of ignorance and—sometimes—even outright evil?

At times, it has been a bit trying going through the racist tweets. It’s very disheartening to see the amount of hatred and evil some people can carry in their hearts, for no reason other than the way someone looks. It’s disappointing that even in the year 2016, ignorance is still so prevalent in this country. We keep our goal in mind—to take the power away from the rhetoric—and that keeps us motivated to continue. It’s such a difficult issue facing the country, and we know that we cannot solve it by tweets alone, but we hope that we can do a small part and be an ally against ignorance and hate.

Why not join in the fun? Get in on the action by using the hashtags #SnickeringAtRacists and #YoureRacistWhenYoureHungry. Follow the action on Twitter: @SnickrAtRacists.

When you stare evil in the face and laugh, it isn’t so scary anymore. Vote for Snickering At Racists here.