On Wednesday, January 6, Pfizer formally announced their largest branding shift since the mid-20th century. The next day, January 7, Burger King unveiled their new brand, itself the first major update for the brand in more than 20 years. Finally, on Friday, GM joined the fray: they revealed a major shift in tone meant to call attention to their future in electric vehicles.

Why all the upheaval?

The obvious answer (the easy answer, you might say) is right in front of us: COVID-19 has rocked the world, and big businesses have felt the tide turning.

Indeed, Fernando Machado (Global CMO for Burger King) said as much when asked about it. In conversation with The Drum, he cited a desire to avoid short-term, reactionary thinking in light of the crisis, as part of the motivation for reimagining the Burger King brand. 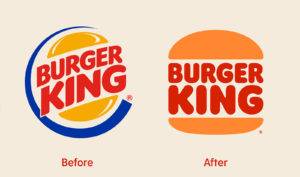 “We were watching things unfold in the APAC market and bracing ourselves for the impact, but we racked out brains and developed both short-term and long-term solutions that worked for the business.“

But, as ever, simple answers rarely contain the whole truth. And here that old truism seems particularly pertinent. After all, the world pre-pandemic (far away as those years might seem) was hardly static. Things were changing quickly even then…and we can imagine that these three brands may well have been in the midst of major changes already.

Burger King has made serious noise in the last few years about plant-based meat and a reduced footprint overall. Pfizer, with all the attention that the race for vaccines has brought, is talking a big game about disease prevention (as opposed to simply treatment). And GM, that old stalwart, is doing everything it can to fight off the energetic advances of Tesla and Toyota, to become the go-to name in electric vehicles.

With the focus on social initiatives now firmly in mind, let’s take a deeper look at the new visuals for each brand.

In the case of Pfizer, the connection between visual change and updated messaging is most clearly apparent. What was once a pill is now a double helix. A company that made its name by treating ailments is looking to build its reputation as a bastion of pioneering science.

To use the words of CreativeBlog, “we’d say the transition from pill to DNA successfully suggests a shift from commerce to science.”

For Burger King, things are more subtle. On the face of it, the new logo system is actually intended to harken back to an earlier era. As Jeeves Williams wrote for AdWeek, “The logo’s appetizing warmth and the nostalgic psychedelia of its accompanying typeface are the antithesis of ‘reblanding,’ a popularly criticized design trend that’s perhaps most famously associated with high-end fashion houses.”

Let’s look a little deeper, though. Sure, nostalgia is a factor in the Burger King update…and there’s some serious value to their simplified, streamlined look. But a more subtle (and maybe more powerful) shift is hidden in two simple statements from Fernando Machado: “There’s no blue food.” and “Buns don’t shine”. Burger King’s new system, it seems, is meant to emphasize the brand’s offering of real, actual, humanly-consumable food. (Perhaps as opposed to some other burger joints…which shall, of course, remain nameless). In a world of plant burgers and carefully observed supply chains, that gentle reinforcement of “real food” may just turn out to be the key to the whole new brand.

Finally, we have GM. Doubtless, it’s the change that’s received the most backlash so far.

Now the new GM logo is hiding a secret. Although you may not have noticed, they’re proud to point out that the new mark actually conceals the familar shape of a plug—hidden in the negative space.

The Reaction To Change

As Jeff Beer at FastCompany pointed out this week, rebranding isn’t all fun and games. There are serious consequences to a company’s bottom line—for better…or for worse. For just one example, look to Tropicana. After a terribly received new branding effort in 2009, sales plummeted 20%. The infamous experiment with “New Coke” is another popular case study.

Sometimes, it seems, the risk of alienation for existing loyal fans isn’t quite worth the potential appeal to the unconverted.

Pfizer, Burger King, and GM are three old, respected, well-trusted brands. A logo (and more broadly, the visual communication system it represents) is a crucial piece of the relationship we build with brands like that.

So maybe it’s no wonder that each brand is facing some degree of backlash to their change. Brand fans can be fiercely loyal…and dramatic change is always hard to stomach (just ask Facebook, Snapchat, Twitter, or any large social platform how their facelifts went).

So why bother? If relatively minor changes are destined to be met with fierce criticism, what drives a company like GM to, say, change the capitalization of their logo? Is it worth it?

Loren McDonald, writing for Clean Technica, refutes the idea that GM whiffed with its new brand by interrogating their intentions. “My belief is this is an image campaign from GM that is designed to convince Wall Street, influencers, dealers, employees, and early adopters that GM is truly serious about EVs. You have to remember you can’t buy a ‘GM’ branded car, so this campaign is about the halo aspect for all of the upcoming electric vehicles from GM brands. And, of course, it is about driving the stock price higher.”

Somewhere in there, no doubt, lies the nugget of value. A branding overhaul signals change….and if the company is big enough, it’s always going to create some buzz. The goal isn’t the buzz, perhaps, and it isn’t simply a chance to “focus on digital communication” (as all three brands noted in their announcements). It’s a chance to change the conversation.

There was a time that simply claiming a larger mission (beyond pure profit) was a revolutionary position. These days, “making the world a better place” is the cliche default. Any corporation worth its salt has a manifesto, and lays claim to a broader mandate of some sort. Corporate Social Responsibility has long since taken the world by storm.

In 2021, it may just be that the largest businesses on Earth are more wary than ever about the pitfalls of inauthenticity. With Twitter full of amateut critics ready to lambast any half-hearted attempt at change, brands may be increasingly aware that any claim to moral responsability needs to be reinforced all the way up the chain.

How can Burger King claim to care about food if their logo looks inedible? How can Pfizer talk about disease prevention with a brand system based around a pill?

GM, Burger King, and Pfizer are all throwing down the guantlet. The branding efforts they’ve announced this year aren’t simple responses to a worldwide crisis—they’re a subtle effort to redirect the conversation.

And in the end, isn’t that what branding is all about?