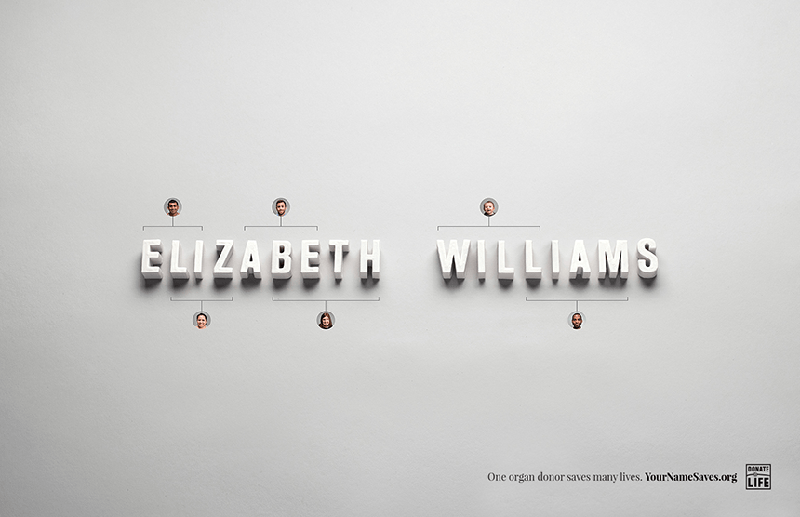 Donate Life America Shows Your Name Can Save Lives

Donate Life America and Leo Burnett Chicago are urging Americans to give the gift of their names to save multiple lives. “ Your Name Saves,” an integrated campaign, seeks to bring to life an often abstract concept with a deeply personalized message: organ and tissue donation.

One person can save up to eight lives through organ donation, restore sight to two people through cornea donation, and heal up to 75 people through tissue donation. The campaign invites people to visit YourNameSaves.org, where they can type in their full name and watch as multiple names emerge out of their individual name. And if users access their social media feeds, this metaphor for connection turns into reality.

While 95 percent of Americans support organ donation, only 53 percent are registered. There are 120,000 Americans currently on a donor waiting list. Donate Life America is hoping to increase registration with the convenience of online sign-up, instead of the rare occasion you’re at your local DMV.

“The opportunity to give is most powerful when it’s personal,” said David Fleming, president and CEO of Donate Life America. “Using an individual’s own name personalizes the appeal to save lives, and creatively illustrates that one person has the power to save and heal the lives of many.”

“Organ donation can feel a bit abstract and distant,” said Dave Loew, Executive Creative Director, EVP at Leo Burnett Worldwide. “By calling people by their very own name to register as a donor, the campaign makes organ donation immediate and personal. The power to save a life already exists within your name.”

We spoke with Associate Creative Director Doug Burnett and Miami Ad School alumnus Senior Copywriter Soham Chatterjee, who provided additional insight into the background and strategy behind this initiative. 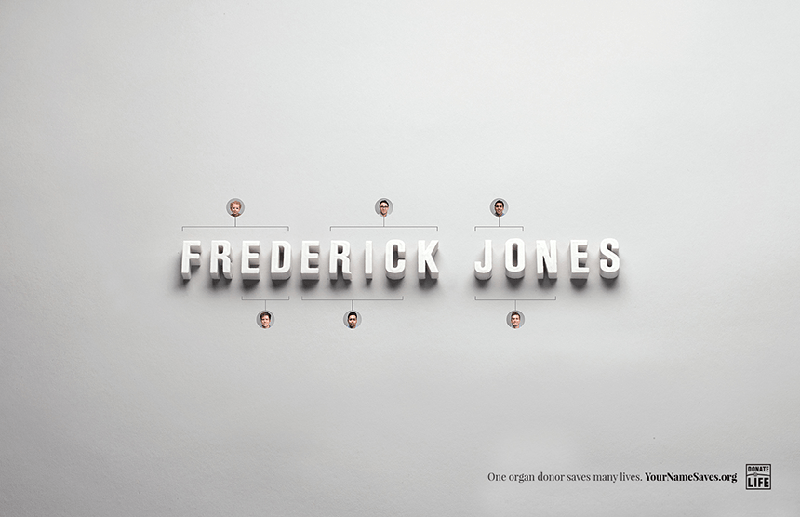 What inspired this idea?

We’ve always been amazed at how one organ donor can save eight lives. One day we were looking at someone’s name and it hit us—a lot of people have names within their own name. And the more we thought about it, the more we realized that your name is the difference between saving lives and not. When you register as an organ donor, your name literally becomes the saving grace for eight people waiting for organs, two people needing to restore their sight, and up to 75 people who need tissues to help them walk and move again.

Why is digital—and primarily social—such a big part of the campaign?

Since it’s such a visual idea, we started the campaign as print and outdoor. But we realized we could reach a broader audience—everyone on earth. Since the majority of people have at least a couple of names within their name, we saw an opportunity to literally call people by their own name to join the cause. Friends can convince friends better than anyone. So we baked social into the idea itself. When you Facebook Connect, it shows your friend’s names within your name, together with their profile photo. And even though 95 percent of Americans support organ donation, most people don’t know how to register, other than at the DMV. So we brought registration to their social feed where they are every day.

Who is the target audience?

Since there is no age limit for registering as a donor, everyone is our target. The client was particularly excited about how this campaign can reach minority groups, a demographic they have a difficult time reaching.

How do you get the word out?

In the first phase, we started the campaign with print and outdoor by partnering with owners of media outlets who have been affected by organ donation. This gave us about 7 million impressions.

In the second phase, launched on Giving Tuesday, we held a webinar with the Donate Life State Teams in almost every state across the country and gave them a toolkit to activate the campaign with friends, influencers, politicians, athletes, musicians and business owners. We built an app ourselves that can generate the visual for any name or even thousands of names at a time. We also identified 100 Twitter and media celebrities, totaling 1 billion impressions, who had more than three names within their name, and tweeted the visual with their name at them. We also built an app that generates your name as an email signature and leveraged the client’s email mailing lists to invite people to use it. And of course, we reached out to the press in hopes of getting print and broadcast coverage.

Did you collaborate with any other teams within Leo

Greenhouse helped us shoot the portraits. MSLGROUP, our sister PR agency, helped us get the word out. Our office in Colombia had a connection with a digital production studio named Plastico, which did the back-end and some of the front-end development.

You can save lives with creativity. Start your creative path at Miami Ad School. Apply today.