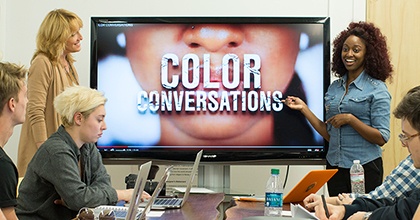 What’s our country going to do to tackle discrimination and defuse mounting racial tensions? Miami Ad School’s Unity Initiative challenged students in the Atlanta, Miami, New York and San Francisco locations to create work that confronts the misunderstandings, gets people talking and helps move this country forward. Out of 100 projects, seven finalists were chosen. We need your vote to decide which project goes forward.

To help you decide, we’re featuring each finalist in a blog post of its own. Here Shenice Brotherson—Miami Ad School Atlanta @ Portfolio Center Art Direction student—takes us through the process of creating her project, Color Conversations.

What was the primary motivation behind Color Conversations?

Shenice: My motivation came from wanting to reach those people that are open to change but have yet to try anything to make change happen. I wanted to do something that could reach out to people that aren’t activists or bold supporters of unity. I approached the assignment head-on. I was very excited to work on Color Conversations and did not find the prospect intimidating in the least bit.

What experiences and events have affected the way you look at the state of race relations?

Shenice: Until the senseless death of Trayvon Martin in 2012, I had not truly realized how racism ultimately impacts this country. You learn about discrimination in school and they touch on the subject during Black History Month, but the issue didn’t actually hit home until the verdict in the George Zimmerman case was delivered. At that moment, I understood the importance of color.

Through the years, with all the police shootings of black men, it’s hard not to think of them as race-related, especially when we see the same scenario play out over and over again. In contrast, it seems that a white subject—even if suspected of committing multiple offenses—can more often than not come through a police encounter alive. At some point, you have to think that the murders of these black men have a lot to do with the color of their skin.

So now you have groups of people that are unheard and misunderstood. There’s no better way to resolve this than to talk about the issues. I wanted to create a platform for all parties to discuss their feelings, experiences and points of view without criticism or judgement. Everyone has questions they want to ask—and may be afraid to ask—or statements they want to make, but are afraid that they will be taken the wrong way. Color Conversations will answer these burning questions and respond to those passionate statements to help us all gain a better understanding of one another. 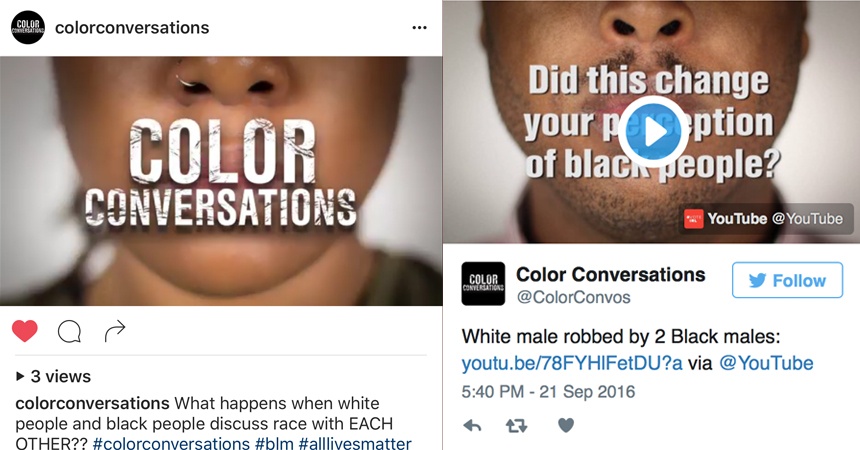 Shenice: I want Color Conversations to get people to talk about issues surrounding race in this country. As far as I’m concerned, discussing the problem is the most important and impactful step we can all take at this point in time. I don’t care if the conversation isn’t pretty to begin with, as long as we create a dialogue. As we gain understanding, we can start the process of acceptance. People can participate in the conversation by hashtagging their questions “#colorconversations” on Twitter or Instagram or by submitting them anonymously to colorconversations@gmail.com. You can see video responses to questions on our YouTube channel.

Are there some subjects that you may have considered off-limits?

Shenice: Every race-related topic is fair game! I want to discuss them all!

What kind of response has Color Conversations received so far?

Shenice: So far, the public’s response has been very receptive. I’ve only had one person feel negatively towards Color Conversations. However, he simply felt that, as a white male, he wasn’t being heard by black people. But, I explained to him that his viewpoint matters. He should feel free to explain why he feels this way. That’s the exact purpose of Color Conversations.

What other questions will Color Conversations be addressing in the future?

Shenice: Here are a few we have in the works:

“Why is having a black friend often offered as proof of not being racist?”

“Is it an automatic assumption that I’m racist because I’m white?”

“Why do white people want to remember tragic events in history EXCEPT things like slavery or the civil rights movement, etc.?”

“Do you think white privilege exists?”

“Why do white people put forth so much effort—and provide so much financial support—to save and care for animals, but don’t put forth the same effort to help their fellow human beings, particularly those of color?”

“Why are so many black fathers seemingly not around?”

“Why does the topic of race make EVERYONE uncomfortable?”

Shenice would also like to thank the following students for their invaluable help in this project: Keyonna Calloway, Ashly Hernandez, Gina Cassaro, Frank Hammar, Kole Davis and Hanna Guthrie.