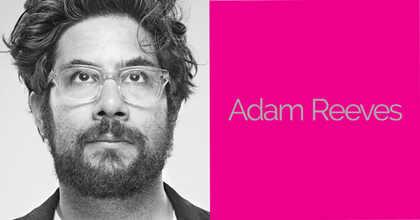 Copywrite Your Way to a Grammy Award

Miami Ad School grad Adam Reeves has pretty much won every single award out there. (No Oscar yet—fingers crossed.)

Adam Reeves has won virtually every award known to humankind. In fact, he’s been named the most awarded copywriter in the world by Creativity Magazine. His “Cube” installation for HBO is part of the permanent collection of the MOMA. Hell, he’s even won a Grammy. (So far the only Miami Ad School grad to pull that off.) While he’s waiting for that phone call from the Nobel Prize Committee, we decided to catch up with him and pick his brain a bit.

Carlos Vazquez: So, what were you up to before you came to Miami Ad School?

Adam Reeves: Floating aimlessly down the river of life. (AKA navigating the post-college world armed with nothing but voracious curiosity, a penchant for writing, and a bachelor’s degree in history.)

CV: What was your very first job after graduation?

AR: I worked as a copywriter for the now-defunct but always-glorious One and All in Minneapolis, writing copy in exchange for pizza and beer.

After his storied stint working for what must have been okay pizza and pretty decent beer—it was Minneapolis after all—Adam moved onward and upward. On the strength of his student portfolio and his work at One and All, Adam landed on greener pastures with the black sheep at BBH in New York. After five years at BBH (as ACD/Senior Copywriter) and another five as SVP, Senior Creative Director at BBDO, Adam relocated to the left coast and the hallowed halls of Goodby, Silverstein Partners as Creative Director Associate Partner.

CV: Where are you doing your “thing” at now?

AR: I work at 215mccann [as Executive Creative Director], a small agency in San Francisco. We work at the intersection of entertainment and technology for brands like Hulu and Xbox.

Bet On Yourself: Become Who You’re Meant To Be

CV: Of all of the thousands of projects you’ve worked on, can you pick a favorite that’s near and dear to your heart?

AR: That would be “Dreams of Dali,” a project I creative directed while at Goodby Silverstein Partners. We created a virtual reality tour of a Dali painting—something that had never been done—and furthered the artist’s known explorations in technology. It’s an immersive, beautiful experience and I was proud of our team for creating it, and that was before Wired Magazine The New York Times both called it a great example of technology furthering art. It lives today at The Dali Museum in St. Petersburg, Florida.

The “Dreams of Dali” project as covered by the BBC (360-degree video).

CV: How would you describe what you do as an ECD to someone fresh out of college and considering a career in the ad world?

AR: I help set the overall creative vision and tone of voice for the brand. I work with the client and the creative teams to explore and come up with the best possible communication. I also work intensively with the writers, art directors and designers—pushing their ideas and helping their fullest glory see the light of day. Or something like that.

CV: Say I wanted to be a copywriter. What advice would you give me?

AR: Write. Write. Write. Then go have some fun (preferably involving reading). Then go write some more.
CV: Funny, but another writer gave me that advice back in 1991. I took it and—lo and behold—it was right on. I guess good advice has no expiration date.

Every success story has a beginning. Start your creative career today—Apply Now.