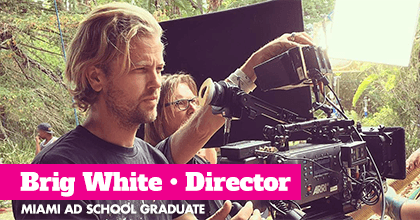 Bet On Yourself: Become Who You’re Meant To Be 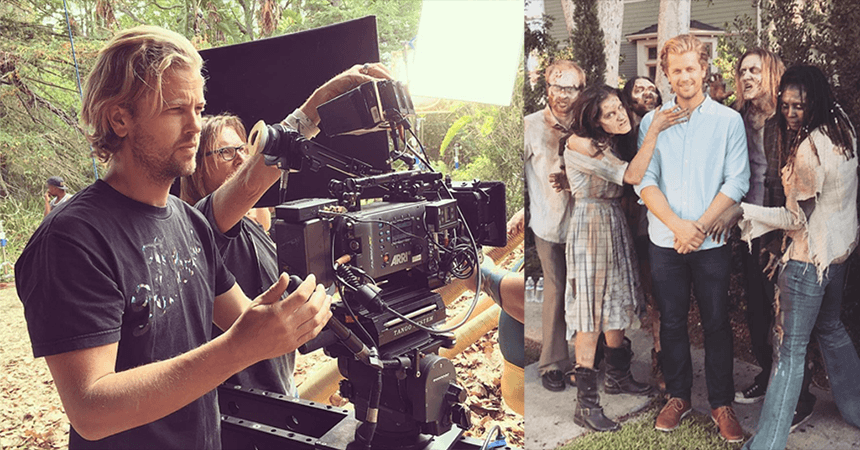 Brig on set and with some his best undead friends.

Carlos Vazquez: What were you doing before you joined Miami Ad School’s art direction program?

Brig White: Before Miami Ad School, I was pretty much without a plan. I had just graduated with an English degree and my new father-in-law was wondering what I was going to do with it. I liked design, but didn’t know much about it. I liked reading books and watching movies. But other than that, I had no idea what I wanted to do.

As a student, Brig already evidenced a fascination with directing, foreshadowing his future career. Here is his case study for Doritos featuring his first attempt at claymation, circa 2009.

CV: What was your first job after graduation?

BW: There was one agency I wanted to work at—and only one. So I only applied to one. Crispin Porter + Bogusky. By some miracle or clerical error, they offered me a job. I was so happy. I walked in the front door of the agency and didn’t leave for three days. I ate every meal there and I slept at the agency at least once a week. I was in heaven. I’ve never been in an environment where people valued ideas so much.

CV: Where do you work now?

BW: I was a creative director at The Martin Agency when I realized I wanted to be on set all the time. So I bought a camera, cast my friends and family and started shooting. Constantly. I started shooting the scripts I wrote before I presented them to my client. I went to Home Depot, built sets, sewed wardrobe. It paid off. Oreo wanted a 30 second spot to introduce Oreo Minis. They had all the media bought. But we had a script that was two minutes long, and it was great. So I took a risk and shot it with my own money. After we showed it, our client had tears running down her face and she told us that we had to change the whole media buy and play it in theaters across the country. The film did awesome in the awards shows and I won a first place Young Director Award.

Soon after, Tool of North America reached out to me and I made the switch to full time directing.

CV: What’s your favorite project ever?

BW: My favorite project as a director was also the most ambitious project I’ve ever taken on. Amazon called me and said they wanted to make 100 films. One. Hundred. They had written a bunch of them and asked me to write a bunch more. What followed was weeks of a whirlwind of ideas and filming. We cast most of the actors in LA. We’d shoot 10 separate commercials each day. We’d be on set writing the next day’s spots while we were shooting. We had special effects, fires, spaceships, time travel, and celebrities like Garth Brooks. The Amazon team was so cool to work with. I like moving fast and not overthinking stuff.

CV: What is it about directing that you find so compelling?

BW: A director brings the creative idea to life. Agencies have a script that they’ve worked months and months on, developing and getting it approved. Once the idea is sold, they look through dozens of reels of directors, trying to find one they think will best execute their vision. They usually narrow it down to three directors and have a phone call with each one. After passing a bunch of ideas back and forth, I’ll sit down and write a treatment—where I detail my ideas for the finished spot—with images that best get across the tone we’re looking for. After they select me, I get to work with my producer finding locations, casting actors, picking out wardrobe, planning each shot and camera move and lighting setup. Then we spend a few days shooting it. This is my happy place. There’s nowhere on earth I’d rather be than behind a camera.

CV: What piece of advice would you give someone who wants to be a director?

BW: Bet on yourself. I had so many people tell me how hard it is to become a director. It’s all I thought about. I asked every director I worked with how I could get where they are. They all said the same thing, “Start directing stuff.” But that was tough, since a film shoot costs over $100K a day. So I bet on myself, spent all my savings on a camera, some lights and lenses and jumped in with no idea what I was doing. I knew I had what it takes if someone gave me the chance. But since nobody was giving me the chance, I had to give it to myself.

Brig and John McAdorey speak at TEDxRVA about their crowdsourced Foo Fighters concert and how fortune often favors the naive.

Take your first step towards your future. Apply now and get started on your creative career.