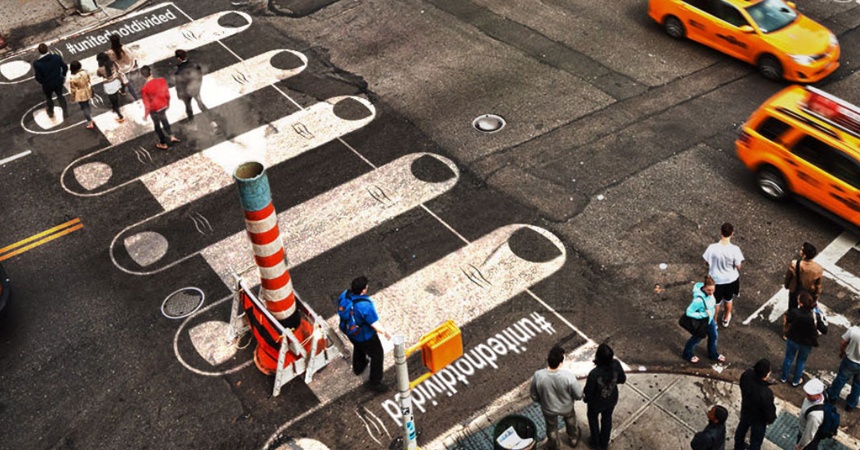 A Powerful Symbol for Racial Harmony: ‘United Not Divided’

A finalist in Miami Ad School’s Unity Initiative, #UnitedNotDivided takes to the streets to promote unity and solidarity.

With race relations as strained as they are today, we all feel a sense of urgency, a desire to change things for the better as quickly as possible. Miami Ad School students in Atlanta came up with #UnitedNotDivided, a project that would allow people across the nation to convert standard striped crosswalks into black and white interlocked fingers, using cheap crowdfunded stencil kits and temporary chalk spray paint. Ordinary pedestrian walkways can be transformed into powerful demonstrations of the need for national unity and an end to racial strife.

Miami Ad School Atlanta @ Portfolio Center designers Michael Booth, Brendan Brines, Taylor Claudell, Alex Cohen, Andrew Mabini, Melanie Maynard and David Payne collaborated on the project as part of Miami Ad School’s Unity Initiative. Students in Atlanta, Miami, New York and San Francisco developed projects to promote understanding and racial unity. Student teams came up with 100 unity initiatives. Judges—leaders in industry, government and advertising, selected the top seven. Now it is time for you to be the judge. Vote for the best idea. To help you decide, we’re featuring finalists in blog posts of their own.

Related Post: Vote for Peace: Which Idea Can Help Heal the Racial Divide?

How did you approach the Unity Initiative assignment?
Taylor Claudell: We wanted to get to the core of what is going on. Is there something beyond supporting one side or the other? Sure there is. Somewhere along the way we’ve stopped supporting each other—together—in unity.

Andrew Mabini: We approached the assignment with an open mind, knowing that everyone had their own opinion. The assignment was intriguing and the conceptualization process involved conversations about issue that we fervently hope our audience will have for themselves.

Alex Cohen: I can’t speak for all of us, but I was definitely cautious. The topic was very volatile and it felt like it was getting worse by the day. My motivation was the ever-increasing violence that seemed to be erupting from all sides.

Brandon Brines: Yes, it was intimidating, and I wanted make sure to treat the matter with sensitivity. It is a massive cultural problem with no simple answer and I wasn’t sure how to approach it.

What was the original inspiration behind the crosswalk design?
Melanie Maynard: Focusing on the themes of unity and strength, we started bouncing ideas around about how we could symbolize coming together. It occurred to us that crosswalks were stripes of black and white that could easily be turned into hands coming together. It was something that could be done anywhere around the country and perhaps be a positive answer to everything that has been going on. After much deliberation on a multitude of options, we finally landed on #UnitedNotDivided. We felt it was a message that all Americans could embrace.

TC: We were also influenced by the March on Selma. People interlocked their arms and walked together, hand-in-hand, united in the fight for change. Those people faced opposition when trying to cross the bridge to Montgomery, the capital of Alabama. It took three attempts—including one on a day still known over 50 years later as “Bloody Sunday”—to cross that bridge.

What specifically would you like United Not Divided to accomplish?
AC: We want people to see that there is a problem with racial violence in this country and the most effective way to solve that problem is to unite. We are stronger together. The reality is, that no matter what side you are on, we all just want peace.

MM: It would be great for the image to be remembered for years come. That people wouldn’t be able to look at an ordinary crosswalk in quite the same way again. They’d see it as interlocking fingers, re-kindling the desire for unity and reconciliation. AM: I’d like for our crosswalks to be catalysts for conversations about the issues we face and what can be done about them.

How would you like to keep United Not Divided alive?
MM: The project was conceived as temporary works with chalk paint. But, it would be great if some of the installations could be permanent—in appropriate locations—with municipal approval. Created with the same materials used for the crosswalks themselves, they would last for many years as an iconic symbol of the need for Americans to stand together, despite our differences and the mistakes of the past.

Now, more than ever, we need to come together. Vote for United Not Divided.