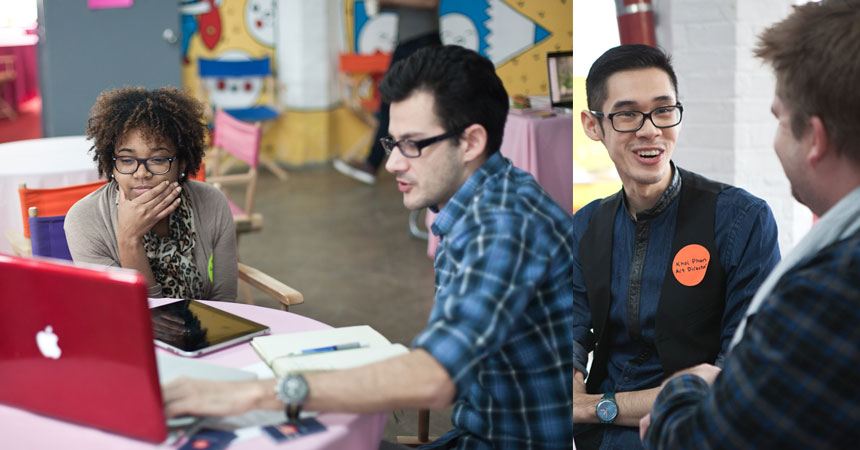 Twelve Interviews in A Single Day? It Can Happen to You too at Portfolio Review.

At Miami Ad School’s Portfolio Reviews, Advertising Agencies From All Over The Country Come to Interview You.

Fresh off his graduation, copywriter Jon Gruber started the process of landing that all-important first job. He saw the upcoming Miami Ad School Portfolio Review, just a few weeks after receiving his diploma, as the start of a long, arduous ordeal. Despite this, on the morning of portfolio review, he arrived with MacBook Pro in hand, ready and eager. By late that afternoon, he had nearly a dozen interviews, including a particularly promising one with the creative recruiter from Deutsch. In little more than a week, he was freelancing at their New York office. After less than three months, he was brought on staff as a full-fledged copywriter. Not really much of an ordeal, was it?

Four times a year, a portfolio review puts our graduates in front of creative recruiters from the best agencies in the country and around the world. Agency representatives often outnumber grads! It’s a unique opportunity to have up to 12 interviews in a single day, all with ad agencies, design firms, and media and tech companies who have come to rely on Miami Ad School as a source of top-flight creatives. They come looking to hire, and that’s what they do.

“I met with the director of creative services at the Portfolio Review in San Francisco and was working with the agency the very next week. Everything fell into place thanks to the Miami Ad School Portfolio Review and the doors it opened for me.”

Here’s a list of some of the other Miami Ad School grads hired over the past several weeks:

Some of our alumni have recently moved up in the world:

Many of the these new hires met their future employers at one of Miami Ad School’s Portfolio Reviews. Some were hired as a result of impressive internship performances and some by teachers who knew they had spotted someone they wanted to work with. Still others found their opportunities via the Job Leads for Life Program that provides graduates with hundreds of job leads every year—at all industry levels—throughout their careers.

Prepare for a creative career of your own. Learn How to Apply.
Application Deadline is February 26th.